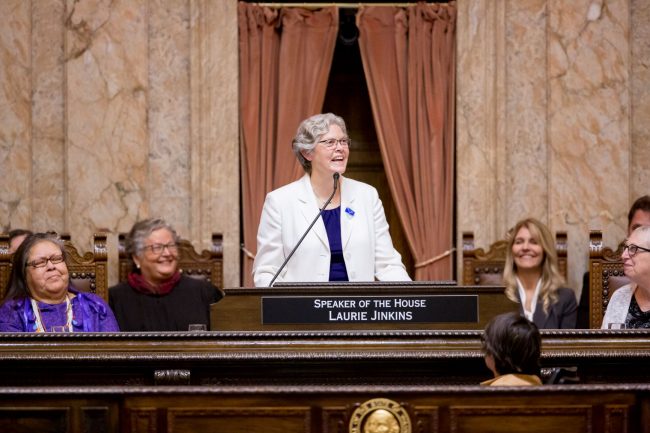 Laurie Jinkins made history on January 13, 2020 when she became Washington state’s first woman and first out lesbian Speaker of the House. She represents the 27th Legislative District in Pierce County, which includes East, Downtown, Hilltop, North, Northeast, West, and part of South Tacoma as well as Ruston and Fife Heights.

Laurie started her career litigating child abuse and neglect cases for the state Attorney General’s Office. She then shifted her career toward public health, serving as an assistant secretary of health at the state Department of Health, and now as Senior Advisor at the Tacoma-Pierce County Health Department. She has also been active in advancing Washington’s anti-discrimination laws both prior to and during her time in the House.

Prior to becoming Speaker, Laurie served on the House Appropriations and Health Care & Wellness committees, and chaired the Civil Rights and Judiciary Committee.

Laurie and her wife, Laura Wulf, live in Tacoma, where they raised their son.