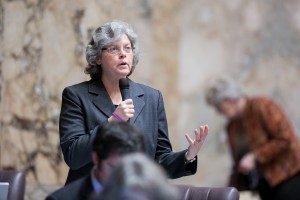 “Coming down with the cold shouldn’t cost you’re your job. If you work full time, you should be able to pay your own way. Women should receive equal pay for equal work.

Sick & Safe Leave, Raising the Minimum Wage and Equal Pay are a few small ways in which we can start to build an economy that works for everyone, not just the wealthy few.

Senate Republicans do not believe that all Washingtonians deserve these basic rights. In spite of working full time families are forced to visit the food bank to make ends meet. In the face of broad support by lawmakers, business owners and workers, as well as study after study refuting any potential negative impact on the economy, Senate Republicans killed these three bills.

I am disheartened by Senate Republicans’ lack of leadership. Millions of Washington families are struggling to stay above water. Senate Republicans’ failure to even debate these bills in committee or on the Floor illustrates an unwillingness to entertain the most straightforward protections for working people.

Voters are frustrated by a political system that is not working for them. When the public organizes to pass paid sick days, equal pay for equal work and raise the state’s minimum wage, I hope the Senate Republican Leadership is prepared to deal with the consequences rather than complain about the “blunt instruments” that are initiatives.

Our middle class is disappearing. While the wealth of richest 1% has continued to grow, the rest of Washington families are getting left behind. This is not a Republican or Democratic problem – it’s a human problem.

I call on Senate Republicans to end their extremely partisan approach to these issues and join with Democrats in creating an economy that works for everyone, not just the wealthy few.”