Hello friends and neighbors,
Last week was House of Origin Cutoff. In order for a bill to survive this deadline, it must pass out of the chamber in which it was introduced (House or Senate). I’m pleased many bills promoting greater opportunity, stronger communities, and a better future for all Washingtonians passed the House and are now under consideration in the Senate.
With some exceptions – primarily, bills that are necessary to implement the budget – the House now turns its attention to legislation passed by our Senate colleagues. You can sign up for email updates from legislative committees, as well as look up specific legislation. As always, if you have any questions, please don’t hesitate to contact my office.
Sincerely, 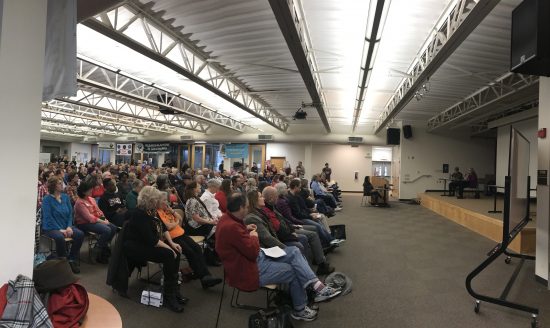 Last Saturday, over 300 residents of the 27th Legislative District attended a legislative town hall meeting with Sen. Jeannie Darneille, Rep. Jake Fey and me. More than half of those who showed up were attending this event for the first time. Click here to see the slides we presented on the state budget. Our primary objective, however, was listening to your questions and concerns. Here are some of the top issues we discussed:

Education – Washington’s constitution mandates the state provide public education for all kids in our state. While the legislature has added nearly $5 billion in new funding to our K-12 system over the last six years, the final piece is teacher compensation. Teachers from our district expressed concern over low salaries, underfunded cost-of-living increases, and inadequate support for new teachers, as well as class size and limited funding for things like more counselors and educational support for at-risk students. Questions were also raised around changed in education policy at the federal level. My seatmates and I are committed to ensuring all students receive a quality education in a welcoming environment.

Mental Health – As a public health professional, I understand the importance of access to mental health services. Too many Washingtonians with mental illness don’t get adequate treatment. Statistics show these individuals often end up in a cycle of homelessness, substance abuse, or even in our criminal justice system. It was encouraging to know our community understands the urgent need to address this issue.

Several bi-partisan bills have passed that help families get their loved ones the care they need, give law enforcement the tools they need to effectively deal with people experiencing serious mental health issues, and integrate our mental health and chemical dependency systems.

There is still more work to be done. Most notably, we need to invest more in community-based treatment. Those who get services in their own communities and stay connected to family and other supports experience the best treatment outcomes. Adequately funding these services is important for our entire state.
Regressive Tax Structure – Our presentation on the legislative budget sparked a great conversation regarding our state’s regressive tax structure. The term “regressive” means that poor and working families pay a higher share of their income in taxes than do the wealthiest families. People shared their frustrations on the unfairness of this system.

Those in attendance expressed support for progressive tax measures like a capital gains tax and closing certain tax loopholes. It shouldn’t be the case that those buying private jets in our state get a tax break for that, while seniors on fixed incomes and working families struggle to make ends meet.

The first bill that passed the House this session was the Levy Cliff bill, which saves school districts from being forced to make drastic cuts next year, including issuing pink slips to teachers.The Tacoma School District was going to lose $2.6 million if the Senate didn’t also pass this bill. Fortunately, the Senate passed its own version of it – in fact, it was the final bill voted out of that chamber before cutoff. The House agreed to their bill, and it has since been signed by the governor, to the great relief of school districts across our state.

The final bill voted out of the House before cutoff was the Equal Pay Opportunity Act. Many women are taking home smaller paychecks than their male co-workers who do the same job. But they don’t even know it because their employers actively discourage—or outright ban—workers from discussing wages among themselves. Keeping women in the dark about pay differences limits their ability to negotiate for higher pay. This bill holds employers accountable and makes it harder to discriminate against women. It was an honor to speak in favor of this bill on the House floor – in fact, I ended up being the last speaker of the last bill before cutoff. Click on the image of the video above to watch my floor speech.

From the Levy Cliff bill at the beginning to the Equal Pay Opportunity Act at the end, the first half of the 2017 session was bookended by two major pieces of legislation supporting greater opportunity in our state.