OLYMPIA – The Washington State Legislature welcomed one of its most diverse cohorts of elected officials in state history on January 14. The most recent class includes a female majority in the House Democratic Caucus with women of color serving in both the House and Senate Democratic leadership ranks.

Washington currently ranks fourth in the nation in terms of gender parity in the state legislature.

“Today is a resounding visual and symbolic demonstration of the diverse strength and talent that comes when we ensure our government is reflective of the people we represent,” stated Rep. Kristine Reeves, D-Federal Way, who will serve her second term in the House. “I am proud to count myself among the largest induction of women and people of color to the legislature in this state’s history. I look forward to fighting for families and putting people first as we work to represent all Washingtonians.”

“We doubled the number of women of color in the Senate in 2018, and again in 2019. We now have the most diverse legislative body in Washington state history,” said Senator Manka Dhingra, D-Redmond, who serves as the Senate’s Deputy Majority Leader. “We are finally starting to see elected officials reflect the diverse communities that make up our country. Policies developed with input from diverse stakeholders work best to address all of our needs.” Dhingra is the first Sikh elected to any state legislature in the nation. 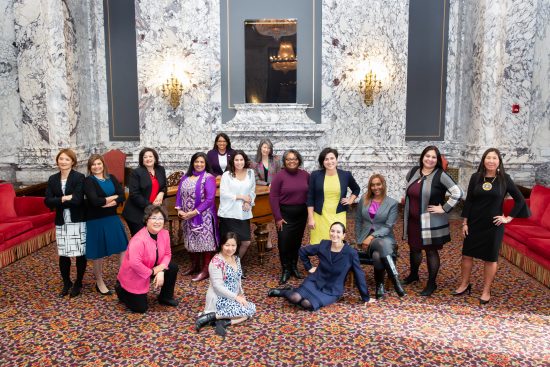 Senators Dhingra and Rebecca Saldaña, D-Seattle, both serve as Deputy Majority Leader, making them the highest ranking women in the Senate. They are joined by newly elected Senators Mona Das, D-Covington and Emily Randall, D-Bremerton.

Senator Das is a small-business owner who moved to the United States from India with her family at eight-months old.

Senator Randall is a community organizer. She plans to focus on affordable college, apprenticeship and job training programs.

Rep. Morgan is the former School Board Director for Franklin-Pierce County and US Army veteran. Prior to her school board service, she served as the Commissioner on the Board of the Pierce County Housing Authority and as a member of the Board of Community Health Care.

Rep. Entenman is the former District Director for Congressman Adam Smith. She was in the inaugural class of Seattle/County’s Head Start program, later serving on the Head Start Parent Council.

Rep. Thai is the former Board President of the Bellevue School Board and Vice President of the Washington State School Board Directors Association. Prior to her educational service, she was a practicing pharmacist, volunteered as a medical interpreter and co-taught in Vietnam’s first nursing graduate program. She is the first refugee woman to serve in Olympia.

“House Democrats have been pushing policies, like the Voting Rights Act, to make all levels of government more representative of its residents because we know that a government that reflects the diversity of Washington will be more effective and accountable to everyone,” stated Rep. Gregerson. “The whip smart and talented women of color who are joining the Democratic Caucus this year is proof that voters want decision-makers in Olympia who are truly representative of them and their values.”

To read this story in Spanish, please click here.